American star Hailee Steinfeld has had a whirlwind trip to Australia this week – despite being a little sick.

And on Wednesday, the 19-year-old got the fright of her life when she took a walk through Kyle and Jackie O’s haunted house at the Sydney Royal Easter Show.

Hailee screamed as she made her way through the spooky set up, which included actors dressed up as scary clowns and yelled: ‘I’m so done, I’m so done!’

The actress and singer put on a brave face as she went through the attraction, which has a total of thirteen rooms.

With eerie music playing in the background, Hailee screamed: ‘Oh my god, stop, this is too much, too much,’ before a clown jumps out to scare her.

‘Nothing at all is happening right now,’ she added, before asking the cameraman not to leave her.

An actor dressed in a blue jumpsuit and mask then jumps out behind her – but she keeps walking, before exclaiming: ‘Oh my god, stop, stop, I hate this, I really hate this.’

Another actor dressed in a scary outfit and mask then touches her on the back making her run as she yells: ‘Stop, stop!’

A saw then appears, prompting her to yell: ‘I’m so done, I’m so done. It’s over, it’s literally over, stop!’

Recording an acoustic rendition of ‘Flashlight’ from Pitch Perfect 2, Hailee had no idea that Angus & Emma had a special surprise up their sleeve.

Just like the ending of Pitch Perfect 2 (spoiler) where the curtain drops and all the past Mama Bellas appear behind the girls, Hailee had her real life Pitch Perfect moment!

Everyone wants Nick (Vince Vaughn) dead. A desperate man, Nick takes out a life insurance policy on himself, payable to his estranged daughter (Hailee Steinfeld). But the policy doesn’t take effect for 21 days and he might not live that long:

No joke this song is my anthem ??✨??#yaskween #lovemyself @haileesteinfeld

Joe Jonas, 26, pranked the 19-year-old Pitch Perfect 2 actress and pop singer during her interview with Australian radio show Smallzy’s Surgery on Nova 96.9 FM Tuesday, three days before April Fools’ Day. Joe, whose band DNCE is featured in her new song and music video “Rock Bottom,” introduced himself to her as “Harry” and imitated an British accent while asking her questions over the phone. His first involved a rather creepy request.

“My first question is, it’s kind of weird, but can you send me some of your toenail clippings in the mail?” he asked.

“Is this for real?” she asked incredulously.

He also asked, “What was it like working with DNCE and that Joe Jonas?”

“It was really great,” Steinfeld said. “I had a wonderful time collaborating with them. I love Joe and the band. Yeah.”

Seemingly sensing something is up, she continued to say, “I think they took a lot away from it, actually. You know, Joe sings the whole second verse, which means I’m not singing it, so that kinda sucks, but whatever.”

Steinfeld also said that when the “Jonas boys,” aka Joe and his fellow former Jonas Brothers members, walk into a room, “it’s like no one else exists.”

I have something exciting happening tomorrow…. pic.twitter.com/NWydCbQTxP

Picture 04: We made it to the top!
@universalmusicaustralia

Hailee Steinfeld is one of the biggest new names in Hollywood and her profile took off after she appeared in Pitch Perfect 2.

She joined Matt and Meshel while she was in Melbourne and spoke to them about what she wants for the future, having acted and now releasing her own music too.

When asked who she would compare or idolise herself on she said ”You know people like Justin Timberlake or Jennifer Lopez have done both and that makes me believe it’s achievable”.

As well as talking about her future goals, there was one issue that needed to be discussed and that was the 2015 prank Joe Jonas played on her for April Fools day.

She said that she spent her whole day debuffing the rumours she was pregnant and is now ”looking to step it up this year, I have to do outdo him!”.

When part-Filipino pop star Hailee Steinfeld first broke the news that she will be visiting the country early this month, she didn’t really reveal the reason why.

On Tuesday, MCA Music International announced that the 19-year-old Steinfeld will be performing a series of mall shows starting on April 8 at the Eastwood Mall in Quezon City. 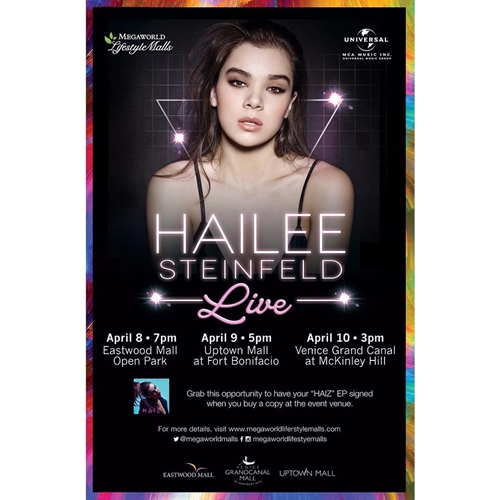