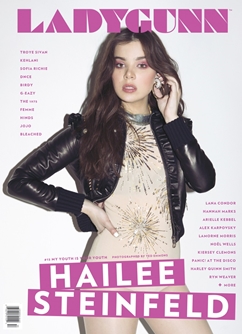 Humility and Hollywood have never really mixed. Much like oil and water, the two may often come into contact, but they merely glide past one another, rarely if ever truly mingling. The majority of actors and music artists are narcissists—many self-admitted and proud—and can you really blame them? After all, when a star shines bright, all it can really see is its own luminous glow. So when a star emerges who possesses that certain introspection, earnestness, and levity that is necessary for appreciating the circumstances and various players involved in one’s success—not merely one’s own talents and fortitude—it’s refreshing. Such humility, as rare as it is, it purely magnetic, which is probably why I feel so immediately drawn to Hailee Steinfeld.

We’ve all heard of those super down-to-Earth celebrities, right? The ones who go on and on about how much they love bingeing on pizza, and how they totally walk their own dogs as if it merits a gold star? As relatable as Steinfeld comes off during our hour-long chat on the phone, it’s not her openness or girl-next-door appeal that strikes me—it’s the fact that she keeps acknowledging her collaborators and influences. When I ask about making the transition from acting to music, she’s quick to thank those who helped her through the shift.

“Something people don’t know is that I started making music around the same time that I was getting into acting, but acting took off and music became more of a side project over the years,” she shares. “Now it’s my full focus. When I signed with Republic Records and was put in the studio with the most incredible writers and producers, I had a hard time trying to verbally translate what I wanted. Because I was with the best of the best, they were able to help put that into words and song for me. I owe a lot to the people that I made the EP with—Mattman and Robin, Max Martin, Julia Michaels, and Justin Tranter.”

When I comment on how an earnest shout-out is a bit unusual for certain celebrities, she puts it in perspective for me: “I’ve been involved in film since I was thirteen. I’ve been studying acting since I was eight. One thing I learned—the easy and the hard way—is that you’re nothing without an amazing writer, director, cast, and an amazing set of producers. You’re nothing without the people that surround you! Launching into music knowing nothing and being paired with some of the best writers and producers out there, I’ve learned so much from them in such a short amount of time. I feel like I owe a lot to them for that.” END_OF_DOCUMENT_TOKEN_TO_BE_REPLACED

come get it bae. (I'm talking about the yen, clearly.) snapchat: haiz