END_OF_DOCUMENT_TOKEN_TO_BE_REPLACED

Steinfeld, who turns 20 on Dec. 11, spoke about playing Nadine, the flawed but likable protagonist, and how she tapped into her own experience as a home-schooled student to portray a girl who is feeling isolated and different.

How do you think your own personal experience of high school helped inform you to play Nadine? What was it like for you in school?
I was actually home-schooled through high school, so I think the not being in high school worked to my advantage (in this role). Feeling that real sense of alienation of being in the hallways of a high school, not really knowing where to look, I guess. What resonated with me more than anything was the growing up aspect; the daily questioning yourself of, “Who am I? What am I good at? What is my place on this earth? How and what do I do to fit in? Do I even want to fit in?” Those questions, I’ve asked myself daily for years. I didn’t feel in any way removed because I didn’t have a traditional high school experience. This character, for me, was a place that I could express what I felt as a person in the last few years of my life.

What was your reaction when you first read the script?
It didn’t occur to me that it was too much or not enough. It was just the perfect amount. It’s so perfectly captures everything about being a 17-year-old girl, including the language.

How much fun was it in your classroom scenes with Woody Harrelson, who plays your exasperated teacher? Was it hard to get through without cracking up?
Oh my gosh, they owe me an entire blooper reel of everything with Woody and me. I have never seen a human face turn so red before, just desperately trying to hold it in. There were so many (funny) moments with every person in this movie. I had the hardest time holding back laughter.

How did you like playing your character Nadine as a 13-year-old with a bad haircut?
That was weird. Obviously, the look we were trying to achieve was Pedro from “Napoleon Dynamite.” When I was fitting the wig, I wasn’t in front of a mirror so the first time I saw myself with the wig my heart kind of broke a little bit. I called my mom and asked if she still loved me. (She laughs.) It had a lot to do with helping me feel that young and I think we all have moments, regardless of how old we are of feeling like a little kid. She’s looking for love or attention from her parents, friends or whoever, and is confused by the fact that she can’t find it. So being in that sort of mind set of just feeling small and you feel young and you feel like you don’t really know anything was interesting. It was a weird thing, obviously, because here I am going on 20, but then sometimes I feel like I’m 13. END_OF_DOCUMENT_TOKEN_TO_BE_REPLACED

END_OF_DOCUMENT_TOKEN_TO_BE_REPLACED 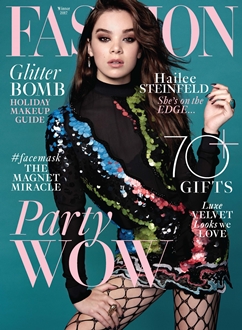 Hailee Steinfeld’s eyes are focused on her phone as she scrolls through her calendar during a break on set for her FASHION cover shoot. She has an overwhelming number of events and appointments, one of which is heading to the studio to record her debut disc. “It’s a little intense,” she says, looking at her schedule, which includes premieres, TV interviews and appearances to support her latest film, The Edge of Seventeen. “I’ve got to be careful. Everything I do has an effect.”

With two careers on the go, it’s wise for the 19-year-old to be particular about how, and with whom, she spends her time. “It’s a good kind of busy to be right now, but it’s about to get crazzzy,” she says, looking at the next few weeks ahead, which include flying to Paris for Valentino’s Spring 2017 fashion show, then to London and Tokyo for a few public appearances and finally to L.A. to prepare for her part in Pitch Perfect 3. Steinfeld credits the role in the film series with giving her the confidence she needed to enter the pop-music scene. It helped that her character, a crass a cappella singer named Emily who was introduced in Pitch Perfect 2, has Anna Kendrick (who plays Beca) as her singing partner. For a while, most people thought that Steinfeld’s singing was just a side hustle—that is until she hit the charts with three major hits: “Love Myself,” “Rock Bottom” (featuring funk-pop band DNCE) and “Starving” (featuring Grey and Zedd).

Even before Pitch Perfect, Steinfeld used music and created playlists to help prepare for parts. At 14, she was even granted a lifetime membership to Taylor Swift’s famous squad, which includes other pop stars like Selena Gomez, Zendaya, Lorde and Haim. “Banding together—whether it’s a group of women or a group of men or both—is awesome,” she says. Steinfeld also developed a meaningful relationship with Shawn Mendes after the pair recorded an acoustic version of his hit “Stitches.” “I remember meeting him three years ago when I was just dipping my toes into the whole music thing and he inspired me to stay on,” she says. “He’s so kind, [and] even then, I knew he was going to be a big star.”

In terms of what to expect from her first album, Steinfeld wants it to be a surprise for fans. She does confirm, however, that the lyrics aren’t based on any of her own romantic relationships. “Bad boyfriends make for great songs,” she says. “Luckily, I’ve never really had a bad boyfriend, but I have watched friends go through it all.” Another source of creative inspo is her older brother, Griffin. “He’s a couple of steps ahead of me,” she says. “So, because of him, I’m able to open up my mind.” END_OF_DOCUMENT_TOKEN_TO_BE_REPLACED

A few weeks ago, I sat down with Steinfeld in a suite at the Peninsula Hotel to talk about the film, which opens November 18, as well as her forthcoming full-length studio album.

First of all, I really enjoyed this movie.
Thank you!

One of the reasons why—and also why I think the film is receiving so many positive reviews—is that your character is not a stereotypical movie nerd. She’s uncool in the way that most high school girls are uncool, in that she lingers on the outside of social circles and wonders what she’s doing wrong. Was that something that you and the writer-director, Kelly Fremon Craig, discussed before filming began?
Those conversations really came into play when we started to go through wardrobe and hair and makeup, and creating the look of this character from zero. Off the bat, it never really felt like a stereotypical character. During the auditioning process, Kelly and I had real conversations about my experiences in high school and Kelly’s experiences in high school and experiences that she had talked to other high school students about.

When we got into wardrobe, we wanted to create a look that was obviously different. The character is called out onscreen for her not-so-great style. But we wanted it to still be aspirational in a way. She has her own sense of style, and whatever that may be—it’s not bad, it’s not great, but it’s her own thing. It’s what she feels good in, and that’s the most important thing and the bottom line. So those conversations happened as we were trying to create somebody who was different but unique and special.

Because there’s nothing wrong with the way she dresses. It’s just not what the “cool girls” are wearing.
Exactly.

It does. But that’s so prevalent too, that feeling of social awkwardness in high school. And that feeling is often exacerbated by having a “cool” older sibling, as Nadine does.

You have an older brother in real life. Did you draw from that relationship to create the brother-sister dynamic onscreen?
In ways, yes, absolutely. It helps already having one and knowing what it could be like if your best friend started dating him, and they would have their own thing and I would feel very left out of that circle. I think having a brother who is very good-looking and did go through high school and had a social life and went to parties and was on the football team—like, standing back and watching that—definitely helped, walking into this film and knowing that I had this preexisting experience. That I had a brother who was this, that, and the other, and I wasn’t. Luckily and thankfully, my brother and I don’t have nearly as much hatred for each other as I feel Nadine has for her brother. END_OF_DOCUMENT_TOKEN_TO_BE_REPLACED