Hailee Steinfeld, Noah Cyrus, Julia Michaels, and Grace VanderWaaal will all be hitting the stage at the Microsoft Theater in Los Angeles on Saturday, April 29, for the awards ceremony. They’ll be joining Kelsea Ballerini, Alessia Cara, Jordan Fisher, and Train who were already previously announced earlier in March.

At the 2016 awards, we got to watch Hailee rock out to her hits “Love Myself” and “Rock Bottom,” but this year we’ll be treated to some of her newer work including “Starving,” which spent a whole four weeks in the number one spot on the Radio Disney top 30. She’s also nominated for two ARDYs, including “The Buzz — Best Breakout Artist” and “XOXO — Best Crush Song.”

Picture 02: Need soon to be sooner

Picture 03: “The only lie I ever told you is that I liked you when I already knew I loved you” ✨? @wrdsmth

Picture 04: 5 MILLION OF YOU?! THANK YOU for your constant love and support. Thank you for sticking by my side and thank you for listening even when I’m quiet. I love you. ??? 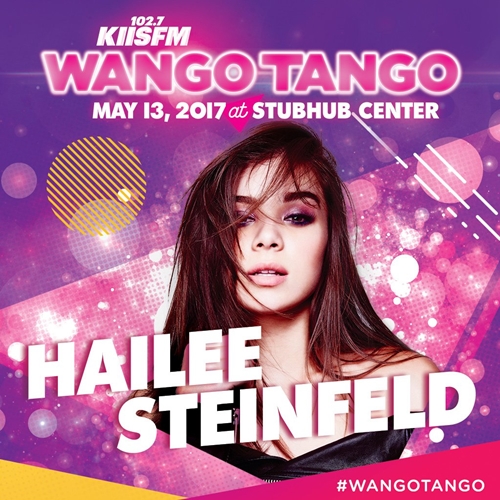 As the new brand ambassador for Reef, Hailee Steinfeld is currently starring in the brand’s spring ads, with another campaign set to launch in early summer.

FN got an early look at the new campaign, which features Steinfeld in ripped jeans, a pop-art-print jacket and the new tortoise-shell flip-flops launching this fall as part of the Reef Escape collection.

Recently, FN chatted with Steinfeld about partnering with Reef and how she puts together those great looks for her red-carpet and onscreen appearances.

What made you want to work with Reef?
One thing I find super-important when it comes to any collaboration is having a personal connection. Being born and raised in California, I grew up wearing the sandals, and as long as I can remember, multiple pairs have been at the bottom of the staircase, right by the door.

How would you describe your personal style?
It’s evolving, and I feel like it will continue to do that forever. Especially in the past two years or so, I’ve been getting into the music world and finding my identity in the music space versus being on a red carpet. For my own very personal style, I like to keep it comfortable and simple.

What’s it like collaborating with your stylists, Rob Zangardi and Mariel Haemm?
I’d been a huge fan of them for a very long time. We’ve been working together for a little while now, and they helped me find my confidence in the music space and the red-carpet space, and how I can make it seem like they’re not two completely different things but they do have a separation. I trust them a lot.

How do you put together your red-carpet outfits?
It’s based on how you feel in it. I love taking risks. I love that fashion has become such a huge part of my world. [With Rob and Mariel], I don’t have to say anything to them because they’re so amazing at what they do. I’ve been on the road a lot lately, so it’s been hard, but we’ve sent each other references. And our conversations are sometimes based around certain designers or shows that are happening and collections that we love.

Out of all the characters you’ve played, whose style did you connect with the most?
For my movie “The Edge of Seventeen,” I was very involved in the wardrobe. It was very hard to find her because here we have a character who was verbally called out in the movie for having a bad style. So we wanted her look to be quirky and different but still aspirational, where anyone could look at her and say, “I don’t see what’s wrong with what she’s wearing; it’s who she is.” It’s fun to go that extra mile and make a conscious decision to wear shoes that had dogs on them with socks that had cats on them. I wouldn’t necessarily wear an outfit the way she wore it, but I admire her ability to not care what anyone thinks. I relate to that.

Picture 01: Half way through this thing! ?

Picture 02: So great visiting my buds @haileesteinfeld on set of her new film @pitchperfectmovie! Extremely proud of dis one! We did however miss my boy and her bae! @cameronsmoller you were with us in spirit pal! #lol #friends #family #pitchperfect3 #onset #proud #love #atlanta ? ? ❤️

Picture 03: Had so much fun in NYC this weekend at the #ReefEscape event pretending it was much warmer than it really was. ???

Picture 04: There was a minimum height requirement to fly one of the planes so I did what I could to give my sis a little more height. #justbrotherthings #family

Around this time of year, most 20 year-olds are gearing up for spring break. Hailee Steinfeld, however, is not a typical 20 year-old. While many of her peers are taking off to Mexico, the multi-hyphenate star is in the midst of filming Pitch Perfect 3, and balancing her pop music career. Should she ever need a beach vacation–or rather, have time for one–the actress is not lacking in the proper footwear department: Steinfeld was just named the face of REEF sandals. Here, the actress and singer shares her top warm weather travel tips, as well has her upcoming summer plans, and the eternal debate of to Coachella or not to Coachella.

What is your favorite warm weather vacation destination?
I was recently in Barbados for a job and I definitely hope to go back soon. The weather was perfect, the people were inviting, and the food was amazing.

What is your favorite mode of travel?
I happen to love driving. There’s something about hopping in your car that gives off a choose your own adventure vibe. It’s more on your own terms than other forms of transportation and I love an opportunity to be spontaneous. I do also love flying because I can catch up on movies and sleep.

Who is the best person you’ve ever been seated next to on a plane?
I love sitting next to my mom whenever I’m traveling. We laugh ourselves to sleep pretty much every flight.

What do you always pack for a day at the beach?
My headphones, a gigantic bottle of water, plenty of sunscreen, a comfy blanket, and my REEF Escapes.

What is your current beach read?
I wish I could say I was currently reading a book but I find that when I do have downtime to read, I’m catching up on scripts or reading the latest breaking news online.

Are you planning to attend any musical festivals this season?
I hope to be attending Coachella this year but it will all depend on my work schedule. I remain hopeful because some of my favorite acts are performing…

What is your favorite place you’ve ever traveled?
There are too many to choose. Paris and Tokyo both have special places in my heart for different reasons but I also know there are so many places I haven’t even yet gotten to visit. I’m so lucky that my job takes me all over the world. It’s surreal.

What is on the top of your vacation bucket list?
Great question. I’m currently trying to figure out where my next vacation will be. Tulum seems to keep resurfacing…

What is the best souvenir you’ve ever picked up on a trip?
I can’t pinpoint just one. Whenever I’m visiting a new place I always try to grab something that will always remind me of the trip. I’ve got a great collection of memories that includes even the smallest items like match books or postcards. END_OF_DOCUMENT_TOKEN_TO_BE_REPLACED

“Pitch Perfect 3” is actress Hailee Steinfeld’s latest project and probably one of her tickets to her current popularity. In the musical film, she portrays Emily Junk, the daughter of a former Bella, Katherine Junk, making her a “Legacy Bella.”

During her recent visit to New York, the 20-year-old American actress opened up about her wardrobe for the upcoming “Pitch Perfect 3.” Speaking to FN, Steinfeld said her character has changed and developed in two years’ time.

“We’ve had a great time finding her [Emily Junk] cool and her style, even though it’s a little quirky,” Steinfeld said. “[Emily] is still the young, fresh one in the group, and you can see that especially in her clothes.”

In a separate interview, Hailee Steinfeld also shared what viewers can expect from “Pitch Perfect 3.” Aside from the wide range of acapella, the highly anticipated sequel will also feature tons of dance moves.

“I’m in the middle of it now and it’s going great,” Steinfeld told The Daily Front Row. “We’re at the halfway mark now and it’s awesome. The choreography is amazing. The music is so fun and it’s a great storyline. It’s going to be a good one!”

Directed by Trish Sie, “Pitch Perfect 3” is scheduled to be released on Dec. 22.