Hailee Steinfeld definitely had a Cinderella moment at the Academy Awards a few weeks ago, as she glided down the biggest red carpet of the year in a gorgeous hand-painted floral Ralph & Russo couture creation. But all wasn’t as it seemed, she later admits, as she suffered a minor wardrobe malfunction before she even entered the theater.

“The dress was so beautiful and so delicate,” she tells PeopleStyle over the weekend in New York City, where she was celebrating her new campaign for the surf brand Reef. “Putting that dress on, I was like, I don’t want to move. But [my stylists] Rob Zangardi and Mariel Haenn were like, ‘Just relax. Have fun. Just kill it.’ When I got on red carpet, there was a tiny little tear in the dress. And I’m like, ‘It’s too delicate for me!’”

Behold, she was right (look just above her waist, on her left side): 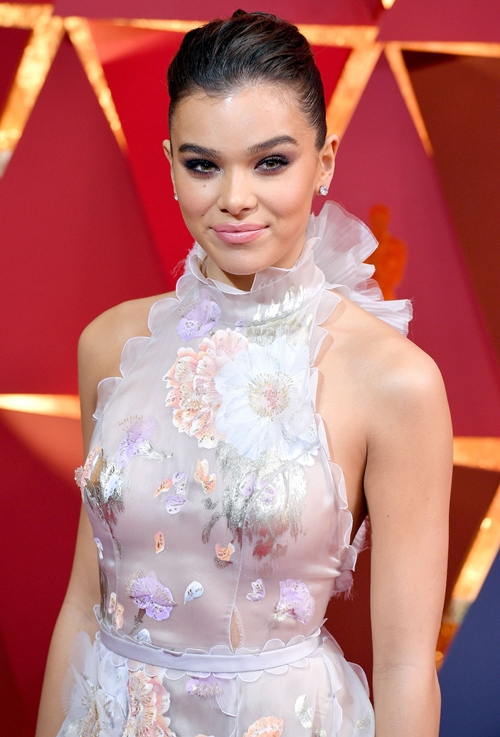 The tear “was getting bigger and bigger as I went down the carpet, because anytime anyone stepped on the train, it would just rip more and more,” she tells us. “There was a point where I was awkwardly holding my hand to try and hide it as it was getting bigger.” 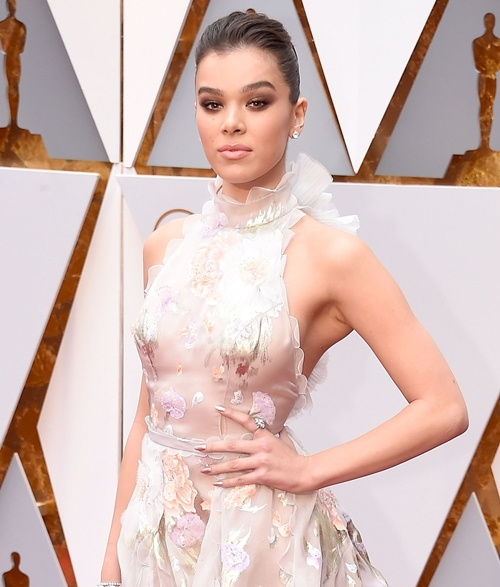 It was a catastrophe, she says, especially because she knew she had to get on stage to present Best Animated Feature Film alongside Gael Garcia Bernal during the live show.

“I ran to this wonderful woman who was backstage in the wardrobe department,” says Steinfeld. “Basically, she cut a piece off the back of the dress and sewed it on to the front of the dress to make it look like it was just part of the dress. By the time I presented you couldn’t tell. It was a nightmare. It’s stressful and the clock’s ticking and everybody’s running around. It was a lot.”

But she didn’t let a tiny thing like that get in the way of her having a great night. “I was really honored to wear this,” she says. “It was so gorgeous.”

Later, she attended the Vanity Fair after-party in an equally dazzling design, also by Ralph & Russo. This one was even more fragile—it featured over 145,000 crystals and sequins hand-embroidered onto it “and the sheer lining was dyed to match her skin, so the dress looked extra-delicate,” Tamara Ralph, who designed the gown alongside her partner Michael Russo, tells PeopleStyle. “This one took about four months to make with all the embroidery work.”

“It weighed so much,” says Steinfeld. “It felt like you were carrying something, and it changes your posture and changes the way you walk and the way you feel.”

As for any malfunctions, she said didn’t have another “nightmare” that night. Luckily!

It’s challenging to even think about wearing sandals in NYC, considering the impending #snowpocalypse, but fashion darling and singer-actress Hailee Steinfeld is changing our tune. The 20-year-old beauty was in town over the weekend to promote her new Reef Escape campaign. In addition to talking happy feet, the Cali girl opened up to us about life in the spotlight, new projects—music and acting—and why posing with a parrot is no easy feat!

You’re a California girl fronting a California brand—did it feel natural to sign on with Reef?
Definitely! It’s a brand that I’ve had a lifelong connection with—it’s so timeless. I was born and raised in California and live 25 minutes away from the beach, so Reef has always been my go-to sandal.

What was growing up in the spotlight like?
It’s crazy because I’m just getting started, but at the same time I’ve been doing this for half my life. I grew up in a town outside of everything, in a quiet neighborhood with a bunch of families. I went to school up until 6th grade, and then I started homeschooling. I still live at home.

Do you remember your first audition?
I have countless audition stories, but I guess it was really a series, and still is a series, of small victories. I started my first [modeling] jobs in print and then commercials and then I had guest-starring roles on sitcoms and student thesis graduate films. Every one of those moments felt like something big was happening and it’s crazy to think that was over 10 years ago now. All of those little steps are a key to my success today.

You’re holding a parrot in one of the Reef campaign images. Scary?
Slightly terrifying, but also very exciting. That parrot was amazing and very heavy…it was very weird. I had never held a bird like that before. But it was so cool and very well-trained. It would dance when it was told to dance!

Where is your favorite beach in the world?
I was recently in the Bahamas in Nassau, which was so so gorgeous. It really felt like my first legitimate vacation—I turned my phone off and was on the beach for hours. But living so close to Malibu and being able to drive down to Point Dume or Zuma is a dream.

Many have listed you as “Best Dressed” at the Oscars.
It was absolutely amazing. Going to the Oscars for a second time six years later alone was beyond surreal. Being there in a gown that literally made me feel 10 times more of a princess than I felt the first time when I was 14 in the most gorgeous custom Marchesa princess gown was amazing.
END_OF_DOCUMENT_TOKEN_TO_BE_REPLACED