Hailee Steinfeld has continued to fan rumours that she is dating former One Direction’s Niall Horan after she posed in his tour t-shirt in a Twitter post.

There are many ways to confirm, or hint, to a romance and this is apparently one of them – it clearly has the rumour mill spinning.

The Pitch Perfect star looked the president of his fan club as she gave away the biggest hint to date the two were an item and fans were quick to celebrate the apparent occasion.

She captioned the photo “51.4613° N, 0.1156° W, which according to our geographical experts, points to Brixton, South London, where Niall performed to a sell-out crowd at the O2 Academy on Thursday night.

And one glimpse at the comments section proved the fans shipped the potential romance.

The singer is currently on a world tour for his debut solo album Flicker, while Hailee continues to work on her own music career. Rumours of their romance first started flying around when Niall posted a sweet birthday message for Haliee on Instagram this year. 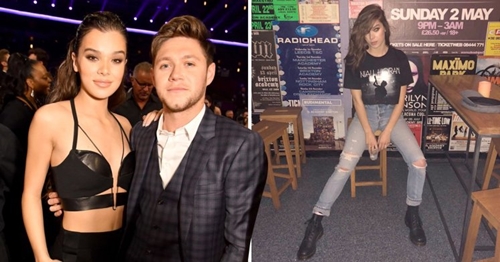