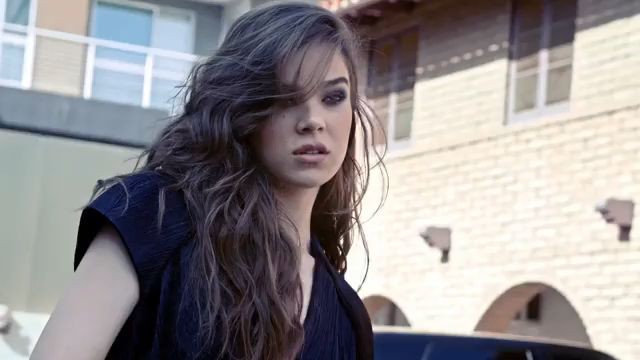 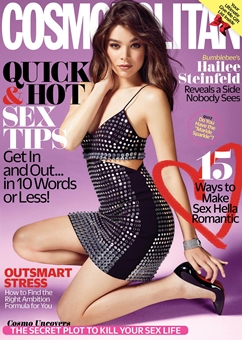 Falling in love can be intoxicating, terrifying, and feel like an emotional roller coaster. But budding superstar Hailee Steinfeld, in full-blown heart-emoji heaven for the first time, can’t wait for the ride.

Hailee doesn’t want to talk about her boyfriend. But the 21-year-old Oscar nominee, pop singer, and former Swift Squad regular is more than willing to use the L-word. A lot.

“When you fall in love,” she tells Cosmo, “you pick up on the tiniest things about yourself. I am one to spread out on the mattress and take up every inch of space. Now I don’t want to do that anymore. I want to make as much room for you as possible.”

“You start doing things for this person and going out of your way to make them happy.”

By now, it’s safe to assume the “you” she’s talking about is Niall Horan. Photos of Hailee smooching the former One Directioner have gone viral online, and the two have left juicy crumbs for fans—Hailee sporting a T-shirt with Niall’s face on it; Niall extolling her awesomeness on Twitter.

Her newest song, “Used to This”—one she wrote and debuted on tour with Charlie Puth this summer—is about sharing breakfast and lying in bed with someone. (Niall recently told Cosmo that he’s a “fantastic cuddler,” so Hailee may not want to make too much room on that mattress.)

“You start doing things for this person and going out of your way to make them happy,” she says about falling deep for the very first time. “And when you see them happy, it makes you happier. When you love who you are with that person…there’s nothing that compares.”

Well, maybe a few things could compare. Like being catapulted to fame at 14, after a mind-bendingly mature performance in 2010’s True Grit. Like costarring with Hollywood heavy hitters such as Woody Harrelson and Viola Davis. Like walking the red carpet at the Met Gala, dripping in diamonds, and having front-row seats at New York Fashion Week.

“I realized, I’m not going to stay here and feel ­uncomfortable just to fit in.”

And like carrying her own Transformers blockbuster, Bumblebee, out December 21. (Hailee will also have a role in December’s animated film Spider-Man: Into the Spider-Verse and play Emily Dickinson in Apple’s upcoming show about the beloved poet.) END_OF_DOCUMENT_TOKEN_TO_BE_REPLACED

We’re hearing that Netflix and Matt Reeves’ company 6th & Idaho are in advanced talks to make the music-themed feature film Idol, on which Hailee Steinfeld is attached to star and produce. The deal has not closed yet, but we understand it is imminent. We’re hearing the news from several sources.

Netflix beat out Paramount and Universal for the Matt King-penned story, which is described as Devil Wears Prada meets All About Eve set in the high-stakes world of pop music. The story revolves around a girl who becomes an assistant for an iconic-type singer and then tries to become her, as in morph into her.

Federal Films, the motion picture division of Republic Records, which Steinfeld records under, will release the original motion picture soundtrack. The True Grit Oscar nominee is expected to be heavily involved in the music.

6th and Idaho Prods’ Reeves, Adam Kassan and Rafi Crohn are producing through their Netflix feature deal. In addition Steinfeld and her mother Cheri Steinfeld will be producing alongside Federal.

In addition to being nominated for a best supporting actress Oscar for the Coen Brothers’ True Grit, Steinfeld starred in the last two Pitch Perfect movies, which together made close to $500 million worldwide. Steinfeld stars in Paramount’s Bumble due out on December 21 and provides the voice of Gwen Stacy in Sony’s Spider-Man: Into the Spider-Verse opening December 14. She also plays Emily Dickinson in the Apple TV series Dickinson.

Among Steinfeld’s double-platinum single hits are her 2015 debut single “Love Myself”, “Starving” with Grey (feat. Zedd), the summer anthem “Most Girls,” and the platinum-certified single, “Let Me Go.” To date, Steinfeld has amassed a total of nearly 2 billion streams globally.

Oscar-nominated actress Hailee Steinfeld will front this year’s MTV EMAs. Steinfeld, who also has a successful music career, will also perform at the show, which this year will take place in Bilbao, Spain.

Viacom’s MTV announced its 2018 host with a sketch on Facebook. Steinfeld scooped the “Best Push Act” at last year’s EMAs. This year she is nominated in the “Best Pop” category alongside Ariana Grande, Camila Cabello, Dua Lipa and Shawn Mendes.

Steinfeld’s other MTV connections include a recent performance at the “Isle of MTV” event in Malta where she performed a set including her debut single “Love Myself,” and the double platinum-selling “Starving.”

“The EMAs are a show where anything can happen,” said Steinfeld. “I can’t wait to host a night filled with incredible artists, performances, some surprises of my own – let’s do this, Bilbao!”

Steinfeld’s next film roles include in Paramount’s “Bumblebee” and in the voice cast of “Spiderman: Into the Spider-Verse.” She is currently in production on the original Apple series “Dickinson.”

“Hailee is a true global superstar renowned for her exceptional talent with a career that spans music, film and TV,” said Bruce Gillmer, global head of music and talent, Viacom and co-brand head, MTV International. “We are thrilled to have her as host for this year’s MTV EMAs in Bilbao and can’t wait to see her light up the stage with her incredible energy.”

The EMAs take place at the Bilbao Exhibition Centre on Nov. 4.

The 2018 MTV EMA nominees have finally been revealed and the competition is no joke this year. Camila Cabello is the most nominated artist with nods in six categories including “Best Artist” and “Best Video” for “Havana” featuring Young Thug. Ariana Grande and Post Malone are very close behind with five nominations each. Drake, Shawn Mendes and Dua Lipa also snagged an impressive number of nods with nominations in four categories each.

As always, the awards will go to the artists who get the most votes and it’s up to the fans to vote for Hailee here!

We’ll find out who the EMA winners are one month from now! The 2018 MTV EMA will be broadcasted live around the globe on 4 November from Bilbao Exhibition Centre.

The trailer begins with Parker’s narration as he explains how he thought he was the ‘only Spider Man’. As each Spider Man (which includes a talking animal) finds themselves in the same dimension, they decide to fight to find a way back.

The team of Spider-Heroes work towards saving Earth in their biggest ever adventure while also fighting the franchise’s most iconic villains which include Kingpin, Green Goblin, and Scorpion:

Here’s some aca-amazing news to brighten up your Monday: Pitch Perfect 4 might be underway. On Sunday (September 30), four of the Barden Bellas—Anna Camp, Chrissie Fit, Brittany Snow, and Rebel Wilson—posted the same cryptic photo to their respective Instagrams. In the photo, the four Bellas pose while holding up four fingers. Wilson, Camp, and Fit all captioned the photo with four hearts, while Snow opted for “4 thumbs down.”

Naturally, fans are freaking out in the comments, with many interpreting the post as confirmation—or at least a hint—that a fourth movie in the popular Pitch Perfect franchise is on the way. Of course, there’s an another explanation for all this: As their Instagrams show, the Bellas were all present for Camp and Skylar Astin’s joint birthday celebration, so maybe the fours were just to show that, well, four of the former cast members have reunited in person.

Still, we’re not prepared to rule out the possibility of a Pitch Perfect 4. Considering the success of the previous three movies, another installment in the franchise is basically a no-brainer. And although screenwriter Kay Cannon told E! in April that Pitch Perfect 3 was the “end of the Bellas as we know them,” Anna Kendrick said she’d totally be down to reprise her role as Beca Mitchell for a fourth time. “Hell yeah!” she told Entertainment Weekly in August. “We’d do them forever.”

Kendrick isn’t the only Pitch Perfect star who’d want to return. Just last week Snow told Extra TV that “all of us would be game for it.” “We have the best time filming those movies. We made some of our best friends during that franchise,” she told the publication. “Part of us knows that chapter might be closed and is OK with that, but we are still incredibly close and we will probably make them—if they want us to—until the end of time.”